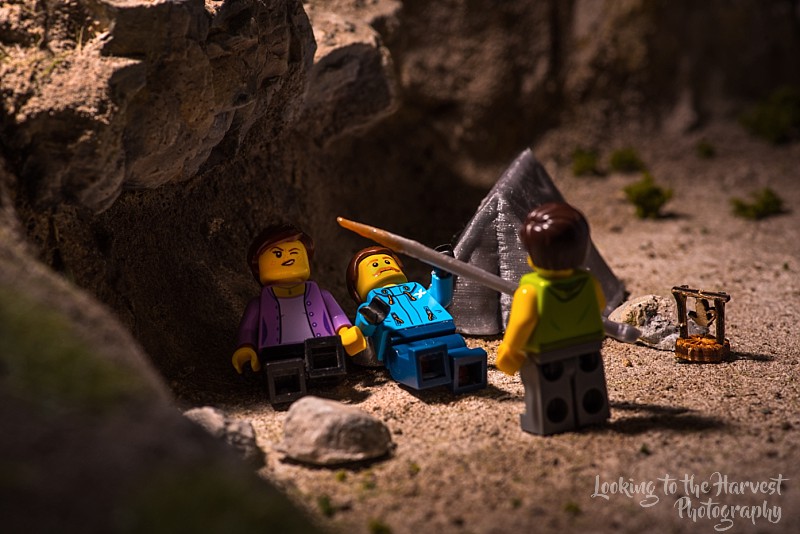 When Phinehas the son of Eleazar, son of Aaron the priest, saw it, he rose and left the congregation and took a spear in his hand  and went after the man of Israel into the chamber and pierced both of them, the man of Israel and the woman through her belly. Numbers 25:7-8

“It’s not fair!” It’s a phrase I know I’ve said more than once as a child. From birth, I had my own view of right and wrong, and even now as an adult my view feels malleable. Movies or TV shows tweak my sympathies towards even “the bad guys.” Well it wasn’t really that bad, was it?

It’s a question that sits in the back of all of our minds if we’re honest.

It was basically the truth.

Everybody gets frustrated with their kids.

We all waste our time.

It’s not an idol– just something I enjoy.

Or is it? Tucked into the end of Numbers is a story that smacks our excuses in the face. The wandering Israelites had turned toward the false gods of the neighboring nations. By mixing with the women of Moab and Midian, they began participating in their sacrifices to false gods. Amazingly, this is not very long after God’s incredible deliverance from their slavery, his faithful provision of food and water, and his forgiveness offered again and again for their sin. Yet Israel acted once again as an ungrateful and adulterating spouse. Imagine the gall of their actions.

Punishment was merited, and God commanded the priests to bring all those doing wrong and put them to death before the Lord. Faussett explains the phrase “before the Lord”  as one that speaks to the vindication of the honor of the Lord 1. After all, the people who were to bear his name, to serve him only, and be a light for all nations had elevated trinkets of wood instead.

While Israel lamented their sin and the coming judgment, one Israelite man walked past the mourners with a Midianite woman and immediately went into the tent to lie with her. This act was brazen. It was purposeful.

So Phinehas, a priest and grandson of Aaron, picks up a spear, enters the tent, and pierces the weapon through both man and woman in their very sexual act.

We will likely not see this story pictured in a flannel graph in Sunday School, but it’s message is important to us today. Our sin isn’t really that bad is it? Yeah it is. In fact, our sin is exactly the same as that man and woman in the tent. It’s brazen. It is rebellious, purposeful, and it’s absolutely ridiculous.

It’s often easy for us to look at the Israelites and remark how foolish they were. God rescued and showed himself to them in incredible ways-why didn’t they just follow him? Well, the answer is actually pretty easy to understand because I do it every day. God has revealed himself to me through his Word, the church, and the Spirit. Yet I still mock his grace each day.  I trust myself more than him. I choose myself over others. I tarnish the honor of the Lord. We all do. Yes, it’s really that bad. Yes, Romans 6:23 tells us it deserves death.

It doesn’t matter how much we think we deserve a lesser punishment- it still doesn’t change the reality that we have consequences for our sin. It matters.

But there’s more from the story of Phinehas we need to note. Phinehas was right. As one of God’s appointed priests, he carried out his duty in executing judgment and atonement for the sins of his people. As hard as it might be to hear, the spear pierced into the couple was just. So where is our spear?

We’ll find our spear plunged into our Saviour’s side. Not in you. Not in me. See, Jesus is our true, high, and perfect priest.  He executes judgment and atonement for his people’s sins- but as Mitchell Chase writes, “rather than pursuing sinner with a spear, Jesus received the spear into his own body.” 2

So yes, our sin truly does matter. The depth of our rebellion against the Lord is enormous. The story of Phinehas points us to this reality, yet it also whispers of the one who is to come, who will execute judgment upon himself.

This is the gospel, the good news- the truth that Christ lived, died, and rose again- taking the punishment of our sins, and abolishing the hold of death for those who trust in him. But we don’t only hold on to this truth when we first believe. We get to hold tight to it every day afterward. We bring it to mind when we start to justify that curt word or impatient attitude. We cling to it when we are in a fight with our spouse or jealous of a friend. We remind ourselves that we deserved a spear, and then remember its place was thrust into the side of our Saviour.

Is life fair? Of course not. For what is fair would be to face death for the treason we have committed against the God who created, loved, and showed us grace upon grace in our sin. Yet instead we receive mercy. Instead we find that the truth is our punishment was drunk to the full by another man. Praise God for his mercy and grace poured out to his children, and the spear we don’t have to bear. Hold on to this truth today, and the next, and the next.